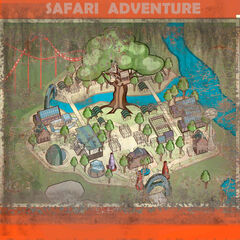 “From Nuka-Town U.S.A., you can access any one of our five individually-themed parks. Experience the future at the Galactic Zone, or relive the Wild West at Dry Rock Gulch. Take a tour through the Nuka-Cola Bottling Plant or visit Kiddie Kingdom and meet the whole Nuka-Family. And Finally, for the nature lover in you, travel to Safari Adventure and delight in over 100 different animal species from around the world.”— Promotional quote

Safari Adventure is a location in the Nuka-World Amusement Park in 2287. The whole area is infested with gatorclaws. The only inhabitants left are a family of primates, alongside a human called Cito.

Safari Adventure was the area in Nuka-World, where the theme was centered around the safari and associated wildlife. When scientists attempted to clone the animals, an animal activist group known as the Animal Friends and Defenders kidnapped one of their top scientists, Dr. Hein, and held him hostage at the Angry Anaconda on the day of the Great War in an effort to put an end to the experiments. Only one person survived at the cloning facility, Dr. Darren McDermot.

After seeing scavengers in the park, McDermot worked to create a strong yet tameable species that would defend the facility, but created a violent subspecies of deathclaw, called the "gatorclaw" instead. McDermot was driven out of the facility as the cloning spiraled out of control, mass-producing gatorclaws and setting them loose into the park. This infestation has so far remained within the walls of Safari Adventure, but also prevented any settling, by traders or raiders, from taking place.

The Safari Adventure zone has two entrances: one to the south, and one to the north. Entering from the south, following the west wall northward leads first to some smaller abandoned buildings and a Nuka-mixer station. Further north is an amphitheater with a small maintenance shed behind it. North of that is a small café with a boat sitting on top of it as well as a boarded-up restroom. Continuing north is the reptile house and just a little further is the northern entrance to the park, which leads to the Angry Anaconda rollercoaster ride.

Starting again from the south entrance, going straight north leads directly to the Safari Adventure Welcome Center as well as a fight between Cito and a gatorclaw. North of the welcome center is a group of cages and still further is a hedge maze that leads to Cappy's treehouse and a hidden Cappy clue. To reach the clue, upon entering the maze take a right, another right, a left, and then continue down the path until the end. To reach the treehouse, from the entrance take a right, a left, a left again, and then hug the left wall until the elevator to the treehouse is reached. North of the maze is a bear cave.

Finally, starting again from the south entrance, this time hugging the east wall, first, a small market will be passed featuring another Nuka-mixer station. From there, continue east and then north and past a boarded up restroom and water tower to reach the primate house. Another hidden Cappy clue can be found behind the gorilla statue in front of the primate house by walking through a hole in the hedge to the right of the primate house entrance. North of the primate house is a small area with picnic benches.

Safari Adventure appears only in the Fallout 4 add-on Nuka-World.

Angry Anaconda construction site
Add a photo to this gallery
Retrieved from "https://fallout.fandom.com/wiki/Safari_Adventure?oldid=3322760"
Community content is available under CC-BY-SA unless otherwise noted.