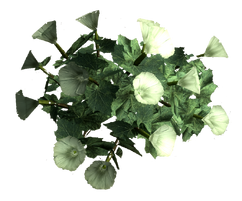 The plant in which the sacred datura root is derived from is a small, green flowering bush with white, blossoming flowers. The plant can be consumed by the player character, resulting in a unique poison effect called sacred datura poison for 30 seconds and a reduction in one's Perception for 90 seconds. The sacred datura poison does not reduce HP, but results in a woozy visual and sporadic audial effect, similar to other poisons. It can be cured by datura antivenom, but regular antivenom has no effect.

The Pip-Boy icon is identical to that of the xander root.

Retrieved from "https://fallout.fandom.com/wiki/Sacred_datura_root?oldid=3418758"
Community content is available under CC-BY-SA unless otherwise noted.