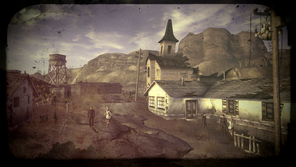 The sacking of New Canaan was the destruction led by Ulysses and perpetrated by the White Legs against the Mormons at the city of New Canaan in 2281.

Caesar, angered by Joshua Graham surviving his execution, tasked the White Legs, a raider tribe in Utah that had been petitioning Caesar to be assimilated into Caesar's Legion, to wipe out all New Canaanites, promising to absorb them into the Legion if they succeed.[2] To achieve this, Caesar sent an envoy, Ulysses, to train the White Legs into a more formidable force. Ulysses taught the White Legs how to fight and honed their ferocity, as well as armed them with powerful weapons and how to properly use them.[3] To achieve the total destruction of New Canaan that Caesar wanted, Ulysses had to get the White Legs to kill a certain way. Young and old, armed and unarmed, the able and the weak, no one was to be spared in the coming raid. He told them that the New Canaanites valued generations and that every generation must be killed.[4]

The White Legs watched over New Canaan from a distance, taking note of guards on duty and waiting for an opportunity when most of the main force was away to strike.[1]

The New Canaanites didn't think the White Legs were a legitimate threat and didn't anticipate them mounting an attack, especially at night when guard shifts were being rotated. The White Legs struck the settlement at night while Graham and many other New Canaanites were away, indiscriminately killing anyone they could, regardless of age or ability to fight or defend.[1][5] The White Legs followed Ulysses' teachings exactly. As a gesture of shock and awe, the White Legs burned down the Mormon Temple with the Canaanite bishop trapped within.[6]

After New Canaan was razed, Salt-Upon-Wounds had the corpses of the slain nailed to the neighboring cliffs and the area salted so nothing could grow.[7][8] The surviving Mormons who escaped, about thirty in total,[1] including Daniel and Joshua Graham, regrouped at the Colorado River.

On a night after the raid, the White Legs braided their hair into dreadlocks in order to honor Ulysses and to possibly curry favor for Legion assimilation. Ulysses was more disgusted by the gesture than anything. The hair that symbolized history and meaning for his tribe, the Twisted Hairs, was being bastardized by the White Legs and their ways of wanton violence with no meaning for the dreadlocks' symbolism. Seeing this triggered Ulysses, he had single-handedly caused the destruction of the history of a tribe of people just as it was perpetuated to him by Vulpes Inculta at Dry Wells for the Legion before.[9]

Retrieved from "https://fallout.fandom.com/wiki/Sacking_of_New_Canaan?oldid=3170304"
Community content is available under CC-BY-SA unless otherwise noted.