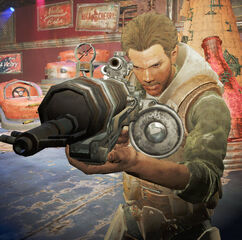 Sabot is a member of the Gunners in Nuka-World in 2287.

Sabot is a Gunner who successfully made his way through the Gauntlet and as a result, becomes one of the possible challengers during Amoral Combat.

Sabot appears at the Cola-cars arena inside the Gauntlet. If one chooses to fight him, he is immediately hostile and he must be fought to the death.

Sabot is one of the few known Gunners that does not have the blood-type tattoo on their forehead. Other examples are Lanier and Bullet.

Sabot appears only in the Fallout 4 add-on Nuka-World.

Retrieved from "https://fallout.fandom.com/wiki/Sabot?oldid=3257042"
Community content is available under CC-BY-SA unless otherwise noted.