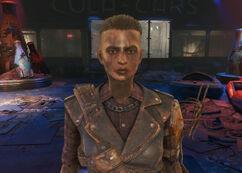 Sabine is a character in Nuka-World in 2287.

She is only encountered as a possible challenger in the Amoral Combat quest. She typically begins the fight by activating a Stealth Boy before attacking.

Sabine appears only in the Fallout 4 add-on Nuka-World.

Retrieved from "https://fallout.fandom.com/wiki/Sabine?oldid=3270514"
Community content is available under CC-BY-SA unless otherwise noted.