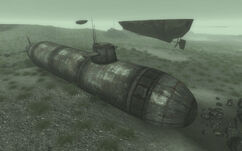 “Agent Jiang; as you know, an important Chinese surveillance vessel was lost in American waters. Your mission is to destroy derelict submarine SSN-37-1A before the Americans can recover and analyze it.”— Espionage debriefing

The SSN-37-1A (called sub recovery site in the Pip-Boy map) is a covert Chinese submarine lodged in the shallow waters off the coast of Point Lookout. She was in the process of being recovered by the U.S. military pre-War.

Covert Submarine SSN-37-1A is a Chinese spy submarine sent to patrol hostile waters surrounding Point Lookout. She sank before the nuclear phase of the Great War, and can be found at the sub recovery site. As for remnants of equipment, all main systems seem to be offline due to flooding and centuries of inactivity. There is no working radio, navigation, weapons or targeting parameters for the sub itself. However, there is a radio (or radio type piece) that is entirely rusted brown and dead. There is no accessible onboard AI nor navigational software. The electricity still works, and the presence of green goo on the deck in the aft section suggests that the sub was nuclear powered. She also apparently has small backup generators in the rear.

Externally, there are no signs of torpedo tube hatches and internally, there is no torpedo room, implying that this sub was for reconnaissance and diversion operation, not direct engagement.

Her mission was as follows:

Variations from patrol are tolerated as required by evasive circumstances. Crew is under strict instructions not to engage enemy if detected. Self-destruct protocol must be initiated in event of imminent capture. Status updates are required at six hour intervals by one-way burst comm on orbital frequency #K17.18.v121.

This would have been an exceptionally dangerous assignment, as it would have taken the sub within 8 miles of the home port of the Atlantic fleet and the largest naval airfield on the east coast.

Above the waterline are a small stranded boat and a buoy. Below, is a medium-sized submarine with a hatch on top.

The submarine, based on her external size, is extremely compact inside. There is only one accessible room, with just two beds available. The ladder leads straight into the roof and a pipe spraying water is also severed in another point but not leaking. There is a silver mainframe computer at the forward end of the chamber, and a generator leaking some kind of green goo to the aft. The sub has about a foot of irradiated water along the floor.

There are only two bunks in SSN-37-1A, suggesting a small crew. There was one surviving Chinese submariner extracted from SSN-37-1A: John Doe. He was transferred to Turtledove Detention Camp after his capture. It is noted in his interrogation report that he was "demonstrating extraordinary fortitude for a relatively low-ranking grunt." The fate of the skipper is revealed in the same report "I'm sure this one would have gone the same way as his skipper if the cyanide capsule in his molar hadn't been a dud."

The SSN-37-1A appears only in the Fallout 3 add-on Point Lookout.

The sub's destruction
Add an image to this gallery

Retrieved from "https://fallout.fandom.com/wiki/SSN-37-1A?oldid=3236902"
Community content is available under CC-BY-SA unless otherwise noted.