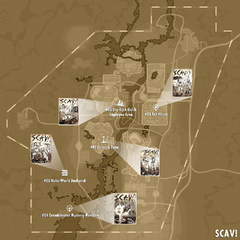 SCAV! is a magazine in the Fallout 4 add-on Nuka-World.

SCAV magazines appear to be black and white hand-drawn comic books. The subject matter and art indicate that they were created post-War. Each issue that is collected adds its own SCAV! perk, ranging from damage modifiers to speech and SPECIAL boosts.

There are 5 issues in total.

The cover designs were created by character artist Ben Carnow.[1]