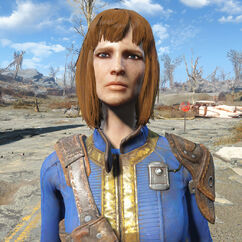 Trader Rylee is a trader in 2287, originating from Vault 81. She can initially be found at Longneck Lukowski's Cannery, arguing with the current owner, Theodore Collins. Afterward, she may appear at any unmarked location for random encounters. Rylee can also be recruited as a level 4 settlement merchant, as soon as the trading emporium is unlocked and built at any settlement with a population of 10 or more.

Through dialogue, the Sole Survivor learns that Rylee grew up in Vault 81, hence the vault suit, but she left the vault to become a trader. Rylee also notes that her Pip-Boy broke, and she threw it away.

After the initial encounter she can be found at the following locations:

Trader Rylee appears only in Fallout 4.

Retrieved from "https://fallout.fandom.com/wiki/Rylee?oldid=3359429"
Community content is available under CC-BY-SA unless otherwise noted.
... more about "Rylee"
RDF feed
Has platform
PC +, Playstation 4 +  and Xbox One +