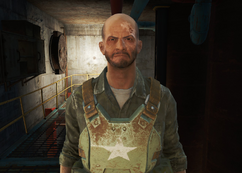 Ryder is a member of the Gunners in the Commonwealth in 2287. He can be found held out in the basement of Gunners plaza along with a large amount of Gunners and a few turrets. He resides in one of the upper offices of the basement near the middle of the area.

Ryder is an officer of the Gunners and is found at Gunners Plaza along with Captain Wes and a large army of other unnamed Gunners. He can be found in possession of a holotape which details his dissatisfaction with Wes' command, stating that a Gunner named Cruz was put on rooftop guard duty as punishment for retreating, but he's still stuck in a "dark, cold basement" and plans to talk to Wes about reassignment.

Ryder appears only in Fallout 4.

Retrieved from "https://fallout.fandom.com/wiki/Ryder?oldid=3295121"
Community content is available under CC-BY-SA unless otherwise noted.