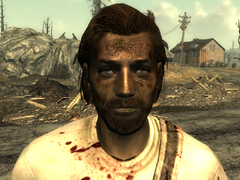 Ryan without his bandana

“Masquerading as one of these foul murderers grows tiring, once the theatrics of it wear off.”

Ryan Brigg is a wasteland scientist masquerading as a raider in the Jury Street Metro station in 2277.

Ryan Brigg is a wasteland entrepreneur with a plan. Mole rat meat is the most easily available meat, but it tastes awful. While he conducts research on improving the taste and making his fortune selling his new creation, he's posing as a rough-and-ready raider captain in order to recruit the manpower he needs to keep his investments secure.[1]

According to the computer in his small hideout, he has been running experiments to eliminate the bitter taste of mole rat meat. After 173 attempts, Ryan Brigg has finally created his restorative and tasty mixture of wonderglue and mole rat meat cured in a metal box together to formulate his amazing mole rat wonder meat.[2]

Ryan has a locked-up and domesticated mole rat named Pumpkin that was the pet of Chucky before his demise.[3]

Ryan Brigg appears only in Fallout 3