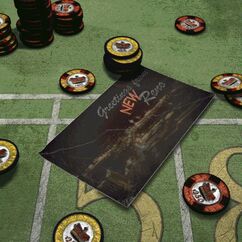 Ryan is a partially head-shaven punk in New Reno in 2241.

Not much is known about him; he is impulsive and thinks out loud more often than he should. He claims to be a producer that makes games, and is rather insistent people should play them.

He speaks some Spanish, says his nickname is the "Polish Hammer" and also claims to have known Big Jesus Mordino when he was "Baby Jesus."[1]

He is a peculiar character but quite cocky in his conversation with the Chosen One.

Ryan was cut from Fallout 2.

Retrieved from "https://fallout.fandom.com/wiki/Ryan_(Fallout_2)?oldid=3349939"
Community content is available under CC-BY-SA unless otherwise noted.