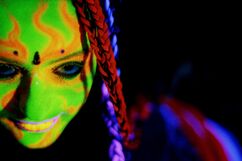 Ruth was originally sent to the Twin Mothers to undermine the tribe according to Hecate's plan. She easily insinuated herself into the tribe because of their friendly nature. She learned as much as she could about them and was amused when she learned of their worship of the goddess Diana. Knowing that Hecate was the only true goddess, she decided to set the tribe straight.

The tribal chieftains listened to Ruth politely and then pointed out to her that she was wrong about Hecate. Naturally, this infuriated Ruth and she began to demand to see the 'all-powerful' goddess of the tribe. The chieftains discussed it amongst themselves and then agreed to take her before Diana. She was then taken to the shrine and told to stand before the altar. The chieftains then bowed and left her alone.

Needless to say, Ruth was stunned when Diana manifested before her, something that Hecate had never done. She fell to her knees and begged forgiveness for what she had come to the Twin Mothers to do. She swore that she would forsake Hecate's plan and help to spare the tribe from Hecate's wrath. All that she asked was that Diana forgives her for her transgressions.

Ruth lowered her forehead to the ground and awaited judgment. She expected to be struck down by the goddess at any moment. After a while, when nothing had happened, she raised her head to find that the goddess had vanished. She never said a word to Ruth, but apparently she had forgiven her and let her live. Ruth promptly swore to uphold her oath to Diana and fled the shrine.

Ruth now finds herself between a rock and a hard place. She is convinced that Hecate is not the goddess that she claims to be, but she is still a very powerful woman. However, Ruth swore to Diana that she would help thwart Hecate's plans for the Twin Mothers tribe. She has no idea how she can accomplish that. So far, all she has done is send Hecate false reports about the condition of the tribe.

Ruth now spends her days learning the ways of the Twin Mothers from Helea. The two women have become good friends and appear inseparable.

Ruth has not appeared nor is she mentioned in any published game. She was to appear only in Van Buren, the canceled Fallout 3 by Black Isle Studios.

Retrieved from "https://fallout.fandom.com/wiki/Ruth?oldid=3265894"
Community content is available under CC-BY-SA unless otherwise noted.