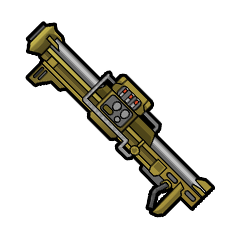 “A little beat up, but it still works. And that's all that matters.”— In-game description

The rusty missile launcher is a weapon that appears in Fallout Shelter.

A high Strength statistic is needed to effectively create the rusty missile launcher.

Nuka grenade
Add a photo to this gallery
Retrieved from "https://fallout.fandom.com/wiki/Rusty_missile_launcher?oldid=3178865"
Community content is available under CC-BY-SA unless otherwise noted.