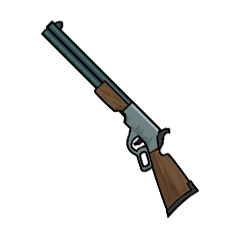 “The lever sticks a bit, but it's still a solid long-range weapon.”— In-game description

The rusty lever-action rifle is a weapon that appears in Fallout Shelter.

The rusty lever-action rifle is a weather worn rifle in Fallout Shelter that uses a lever to load cartridges into the barrel's chamber for firing. Dealing a minimum of 4 damage per attack, it has the second lowest damage output for a rifle in the game.

A high Perception statistic is needed to effectively create the rusty lever-action rifle.