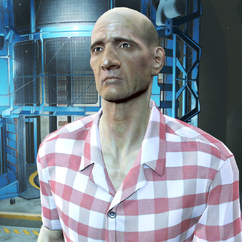 Mr. Russell is a pre-War resident of Sanctuary Hills in 2077 that got to Vault 111 in time.

Mr. Russell was one of the citizens of Sanctuary Hills to be selected as a Vault 111 resident. He made it in time to enter the vault before the nuclear bomb exploded.

As with the other cryogenically frozen occupants of Vault 111, Mr Russell died due to asphyxiation when life support to the cryo pods was switched off, during the Institute's kidnapping of Shaun in 2227.

After leaving Vault 111, his house contains a floor safe beneath a dresser. A terminal belonging to a chem dealer in Sanctuary Hills states that Mr. Russell purchased X-cell at some point, although the dealer suspects that he may have used it on their dogs.[1]

Mr. Russell appears only in Fallout 4.

Retrieved from "https://fallout.fandom.com/wiki/Russell?oldid=3122996"
Community content is available under CC-BY-SA unless otherwise noted.