“All this time, Three Dog has been saving lives, helping Settlers evade the Horsemen's followers, but it's put him on Vault 144's hit list! His last broadcast has him on the run from Death cultists. We need to get to him before they do, and one of his pursuers might know the location of Death's cave!”

Run, Three Dog, Run! is an overseer quest and part of the Horsemen of the Post-Apocalypse Part 3 multi-stage questline in Fallout Shelter.

This quest has armored vault dwellers as enemies (functionally the same as raiders), with some radroach groups. The boss room has one raider leader and four regular raiders. There is also a room with a glowing radroach and some regular radroaches on the top floor.

The name of this quest refers to the line "Run, Forrest, Run!" shouted by young Jenny to Forrest, when he is being chased by some children in the 1994 movie Forrest Gump. 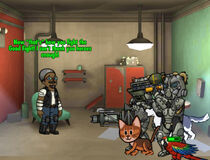 Rewards
Add an image to this gallery
Retrieved from "https://fallout.fandom.com/wiki/Run,_Three_Dog,_Run!?oldid=3262134"
Community content is available under CC-BY-SA unless otherwise noted.