Rum is an alcoholic beverage in Fallout 4.

A Rooster's brand bottle of rum. Bottled in bond and certified by the Medicinal Spirit Association. It increases physical strength but decreases the consumer's intellectual capacity. Rum increases Agility, making it quite valuable in conjunction with stat bonuses, with chems, or alongside the Party Girl/Party Boy perk.

Close up of the bottle 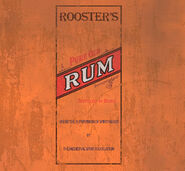 Render of the label
Русский Українська
Community content is available under CC-BY-SA unless otherwise noted.
Advertisement