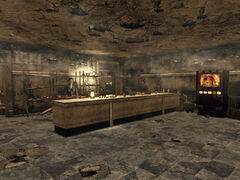 “We're located up by the old train station, in the northwest part of town. Just tell the guards "Hope" and they'll let you through.”— Missionary

The ruined store is a destroyed building in the western portion of Freeside in 2281. It houses a soup kitchen run by the New California Republic. It is located near Cerulean Robotics.

The only entrance is locked and requires a key to open. During the quest G.I. Blues, there will be two NCR troopers standing outside the entrance. In order to enter the building to talk to Major Elizabeth Kieran, a Speech check of 60 (or 30) from one of the troopers must be passed, or a key to the store can be pickpocketed.

Conversely, the password can be learned from the missionary after answering three questions to convince him of New California Republic citizenship status or from Rotface. Inside, squatters receive free supplies from Kieran's group. After completing the quest G.I. Blues, Major Kieran and the squatters will leave the location.

Finding the store is not easy if relying on the Pip-Boy. Approaching it from town, being guided by just the compass markers will not lead to the door. To get there from the Silver Rush, face north, cross the street, and enter the small destroyed building in which Bill Ronte is or had been sitting. Take the door located on the ground floor. On the other side, head north, then turn left under the freeway. Turn left and follow the road heading southwest, parallel to more freeway pillars. The building is on the left-hand side. Alternatively, follow the train tracks towards the Freeside train station with the boarded-up blue doors. The NCR building is opposite the southeastern corner of this building, beyond the rubble.

The ruined store appears only in Fallout: New Vegas.

There is a semi-common bug whereby the player is prevented from exiting the store.[verified] On PC, this can be solved by using the console command unlock with the door selected.