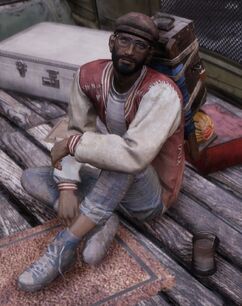 Rodolfo "Rudy" Fernandez is a client of the Blue Ridge Caravan Company at Big Bend Tunnel in 2103.

Formerly a self-appointed Director of Morale Enhancement, Rudy worked at his family's cannery and bakery, similar to Mama Dolce's Food Processing, near Appalachia, telling jokes to the workers as the resident comedian. However, his brothers wanted him to leave, forcing Rudy to take a job as a client of the Blue Ridge Caravan Company, selling pepperoni rolls, telling jokes, and making deliveries.[1]

Rudy Fernandez appears only in Fallout 76, introduced in the Wastelanders update.

Retrieved from "https://fallout.fandom.com/wiki/Rudy_Fernandez?oldid=3425209"
Community content is available under CC-BY-SA unless otherwise noted.