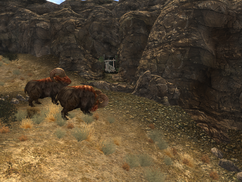 The Ruby Hill mine is a location in the Mojave Wasteland in 2281. It is nestled in a rock facing west. The mine is located northwest of Nevada State Route 157.

Just a few feet from the entrance there is a hollowed-out rock with random loot. A grave can be found northeast of the entrance, near the cliff face. Often, there will be a bighorner bull near the grave.

The main room of the mine features several lakelurks. Going up the stairs and down the path leads to a large water-filled cavern with more lakelurks. Under the water, there is a round table with four chairs, four human skeletons in or near a chair and the corpse of a super mutant brute floating at the water's surface. On the table is a deck of cards with two cards dealt in front of each seat, 1 up and 1 down, as if the four skeletons had been engaged in a game of Blackjack.

A dead Jackal gang member can be found in the big hall with a lake. They carry a worn key, that opens the explosive crates on the island in the lake. Two more explosive crates are located in the northernmost dead-end of the cave.

There is an exit behind the dead-end but it cannot be utilized. Two markers can be seen on the map while standing inside the cave, but only one entrance/exit is accessible.

The Ruby Hill mine appears only in Fallout: New Vegas.

Underwater Blackjack game
Add an image to this gallery
Retrieved from "https://fallout.fandom.com/wiki/Ruby_Hill_mine?oldid=3337664"
Community content is available under CC-BY-SA unless otherwise noted.