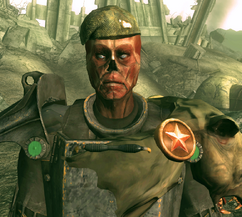 Commander of the Long 15
Boss character

Colonel Royez is a member of the NCR Army stationed on the Long 15 in 2281. Access to this location will only be given if the Courier chooses to launch the nuclear weapons at NCR territory during the Fallout: New Vegas add-on Lonesome Road.

Colonel Royez is in charge of the NCR camp on the Long 15, managing supplies between California and the Mojave Outpost. Royez sports the unique Scorched Sierra power armor which is decorated with a taxidermized bear head and some ornamental pieces. The fact that he is the only one having a suit of functional power armor in the NCR Army and therefore possesses Power Armor Training speaks volumes of his status.

He and his squad are encountered in the irradiated Long 15, amidst the wreckage of 3 crashed Vertibirds. He has very high health and a high DT due to his armor. He also rapidly regenerates health, due to the high levels of radiation in the area.

Retrieved from "https://fallout.fandom.com/wiki/Royez?oldid=3430944"
Community content is available under CC-BY-SA unless otherwise noted.