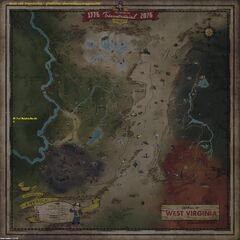 Royal jelly is a consumable item in Fallout 76.

An empty Buffout bottle that has been filled with a yellow, non-spoilable substance resembling honey. It can be consumed raw to restore a moderate amount of AP and satisfy a small amount of hunger with a low chance of disease and a moderate dose of radiation, or can be cooked to provide additional benefits.

Can only be obtained in the following locations, each with a 50% chance to spawn unless otherwise noted:

Royal jelly is a substance produced by honey bees, which is fed to a larva to make them the queen of the hive.