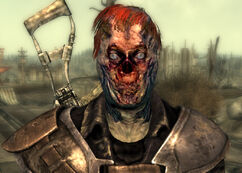 “Uh-huh? Fine, whatever. Being a Ghoul ain't anything worse than any other thing somebody's got to deal with. Like your stupidity, for example. You can't help it. You were born stupid, or dropped on your head as a kid. Either way it ain't nothing you can change. So you deal with it.”

Roy Phillips is a ghoul living in the Warrington tunnels in 2277.

Roy is a pre-War ghoul that is the leader of a group of fellow ghoul dissidents living inside the Warrington Metro Station tunnels. They have decided to try to force Mr. Allistair Tenpenny into letting them move into his tower, after their attempts to peacefully pay to be let in were met with bigotry and threats.

As an ex-cop with a no-nonsense, black-and-white world view that has carried over into his new life as a ghoul, he has come to terms with his ghoulhood and yet demands that humans treat ghouls with respect. He has no patience for bigots. Bessie Lynn is his ghoulfriend.[1]

Roy Phillips appears only in Fallout 3.