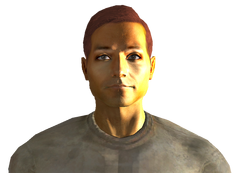 Roy Gottlieb was a former resident of Vault 11 and was the head of the Justice Bloc and the chairman of the Coalition of Vault 11 Voting Blocs.

Roy Gottlieb is mentioned only in Fallout: New Vegas.

Although not included in the final version, at one point Roy Gottlieb was to appear "in the flesh" in Fallout: New Vegas. It is unclear what expanded role, if any, he was to serve.

Retrieved from "https://fallout.fandom.com/wiki/Roy_Gottlieb?oldid=3266895"
Community content is available under CC-BY-SA unless otherwise noted.