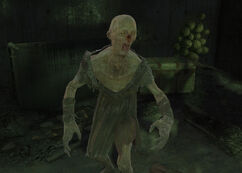 Roy Ward Baker was the director of The Adventures of Captain Cosmos at the Hub 360 film studio in October of 2077. Roy is later encountered there as a feral ghoul.

Roy Baker was the newest director at the Hub 360 film studio for Hubris Comics Publishing's The Adventures of Captain Cosmos television series. Directorial choices made by Roy for the series and the treatment of crew behind the scenes led to production problems for the series leading up to the season finale. Lead writer Mary Nichols and writer Gary Bennett both expressed criticism with Roy's script for the finale, "Captain Cosmos vs. the Giant Cockroach from Mars," citing a giant deadly cockroach as being unbelievable. Gary believed Roy was going to run the show into the ground and advised Mary to begin updating her resume as a result.[1] Captain Cosmos star Rod Stoddard made multiple complaints to Roy after Jangles, the monkey who played the part of Cosmos' sidekick received the largest of the dressing rooms after input from Jangles' trainer stated the monkey would need room for jungle gym equipment and play room. Roy responded by telling the actor when Captain Cosmos playsets outsell the Jangles the Moon Monkey toys, the topic would be open for discussion again, which prompted Rod to have his agent look into theatre auditions as an alternative to continuing on with the Captain Cosmos series.[2][3]

In preparation for the finale, producer Frank Marsh asked Roy to meet with General Tucker and the United States Space Administration to discuss a cross-promotion. The U.S.S.A. provided access to advanced technology developed for the Mars Shot Project, such as the CC-00 power armor and Cosmic cannon, to be used on-screen as part of public relations campaign after the accidental death of a reporter and subsequent cover-up at ArcJet Systems slowed progress for the project. Roy accepted the deal, believing it would save considerably on production costs and possibly be profitable enough for both Frank and him to receive a bonus.[4][5] But the scientists and technicians who brought the equipment to the set were "star-struck" and spent more time fraternizing with Rod and playing with Jangles than performing the necessary safety training. Important details, such as the functioning of the weapons system, were neglected. [6] While filming a fight scene, guest star Johnny Morton was seriously injured when the Cosmic cannon, still believed to only be stage prop, discharged live ammunition. Roy insisted filming for the episode would continue, planning to disguise Carl the delivery clerk with a spacesuit and use him as a stand-in for Johnny, and he contacted Frank to ensure Johnny would not be inclined to sue over the injury. [7]

Roy also asked had the receptionist to send out a company-wide message downplaying the damage and explaining the "explosions and screams" were nothing to worry about so filming could continue on schedule. However, accident onset coincided with the nuclear apocalypse of the Great War. An improperly sealed air ventilation system allowed radiation to enter the studio, making several of the survivors sick. Medical attention did not arrive for Johnny, and the remaining cast and crew were trapped inside the studio. Many, including Roy, later became feral ghouls.[8][9]

Roy's full name is a reference to the real-life film director of the same name, Roy Ward Baker.

Retrieved from "https://fallout.fandom.com/wiki/Roy_Baker?oldid=3379901"
Community content is available under CC-BY-SA unless otherwise noted.