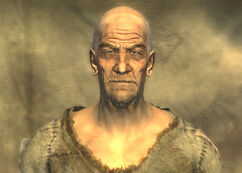 “What is it? Can't you see I want to be left alone with my friend here?”

Roy is a prospector living at the Old Mormon Fort in Freeside in 2281.

Roy is a scavenger (or prospector as most like to be called) in Freeside and one of the more elderly residents. Roy is sharp witted, albeit in a surly way. He, Wayne and Farris just cashed in some scrap metal and decided to go to the Atomic Wrangler to try their luck at the slots when an attack occurred between two parties and they were caught in the crossfire.

When the Courier thanks Wayne for information about who is attacking in Freeside during the quest G.I. Blues, the latter makes mention of one mutant being called "Lou" and something else with a T. He then mentions it was Lou Tenant.

Putting the names of the three men together gets "Roy Wayne Farris" - real name of WWE Legend The Honky Tonk Man, who wrestled with an Elvis impersonator gimmick and is also the cousin of Jerry "The King" Lawler.

Retrieved from "https://fallout.fandom.com/wiki/Roy_(Fallout:_New_Vegas)?oldid=3124338"
Community content is available under CC-BY-SA unless otherwise noted.