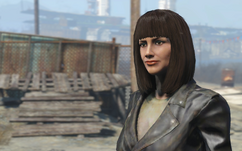 Rowdy is a power armor merchant and member of the Atom Cats in 2287.

Rowdy used to be a raider in the Commonwealth, but she was left for dead by her fellow comrades during a raid. She was then found by the Atom Cats, who took her in as another member of the gang.

At some point, with the other gang members' help, she started to record a holotape called "An Ode to My Hammer," but stopped soon after, saying, "I can't go through with this."

Rowdy is a power armor specialist merchant. She sells the Atom Cats custom paint job schematic and stocks fusion cores, a power armor frame, and a full set of Atom Cats painted T-60. She can also have parts of all sorts of power armor types, ranging from raider to X-01, but availability is limited by the Sole Survivor's level.

Rowdy appears only in Fallout 4.

Retrieved from "https://fallout.fandom.com/wiki/Rowdy?oldid=3294463"
Community content is available under CC-BY-SA unless otherwise noted.