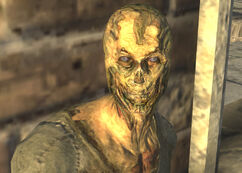 Rotface is a gossiping ghoul beggar residing at Freeside in 2281.

Rotface is sitting against a destroyed building next to Mick & Ralph's, just past Freeside's east gate. He has lived on the streets of Freeside for a long time, so he knows lots of odd information and general gossip.

When the Courier first meets him, Rotface will sell him up to 30 simple tips for one bottle cap each (beside the special quest related tips, see "Quests"). The first tip (which is in fact two in one, as he states) is about the Kings.

The Courier can then either go on for some more tips or come back later to do so. Any of the subsequent tips appear in random order. Rotface won't tell any tip twice, though, so listen carefully.

Retrieved from "https://fallout.fandom.com/wiki/Rotface?oldid=3403812"
Community content is available under CC-BY-SA unless otherwise noted.
... more about "Rotface"
RDF feed
Has platform
PC +, Playstation 3 +  and Xbox 360 +