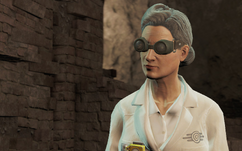 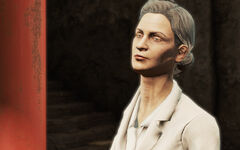 Dr. Roslyn Chambers is a scientist and anti-synth conspiracy theorist in service of the inhabitants of the town of Covenant, operating in the nearby Compound in 2287.

During the Broken Mask incident of 2229, Roslyn Chambers was living with her parents in Diamond City. She was only a little girl when the murders occurred, but the terrible memories of that fateful day would haunt her life, forever. A generation 3 synth, known as Mr. Carter, went rogue and went on a killing spree in the city market. Chambers' parents were shot in the attack, right in front of her very eyes, leaving her grief-stricken and deeply depressed. The incident had left Chambers paranoid of the Institute and its spies. The synths were now her sworn enemy, and it was made clear that the gifted woman was on a mission; to eradicate the synth threat in the Commonwealth.

Prior to 2287, Dr. Roslyn Chambers and her colleagues arrived in the town of Covenant, just east of Lexington. She had intentions to turn the town into a refuge for families that suffered at the hands of the Institute. The doctor and her team persuaded the local residents to assist her in goals in cleansing the region of synths. constructing a laboratory located in a sanitation area in the local sewers, where they worked to discover and flush out suspected Institute agents. Their base of operations became known as the Compound.

Dr. Chambers insists that regardless of the brutality and controversy of her work, her mission is for the greater good of all mankind.

Roslyn Chambers appears only in Fallout 4.

Retrieved from "https://fallout.fandom.com/wiki/Roslyn_Chambers?oldid=3289587"
Community content is available under CC-BY-SA unless otherwise noted.