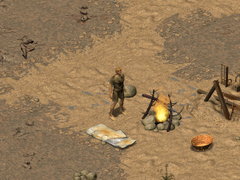 “...will walk my post in a military manner... Oh! Hello children. I'm sorry, Roshambo doesn't have any candy for you. Is that a pledge pin on your uniform? If it is, will you help me fly again? My airship has fallen and it won't get up!”

Roshambo is a crazy old man and a former Midwest Brotherhood of Steel member who lives in Osceolla in the year 2197.

Roshambo is a Brotherhood of Steel paladin who traveled east in one of the airships that pursued the super mutant army, in the same airship as paladin Latham. He informed the Brotherhood elders that storms would negatively impact the air convoy, but his warnings went unheeded. As a result, the airship crashed near a place known as Osceolla.

In 2197, Roshambo becomes a crazy old man who hides away and does funny things with his fingers (presumably playing Rock-Paper-Scissors) and urinates in other people's Nuka Cola. He is the sort of man mothers warn their children about.

He apparently still occasionally meets with Latham, and is somewhat loyal to him, despite being mad at him.

When Latham is defeated, Roshambo becomes hostile to the Warrior and can be killed or left to live on with his madness.

Roshambo appears only in Fallout Tactics.

Retrieved from "https://fallout.fandom.com/wiki/Roshambo?oldid=3359134"
Community content is available under CC-BY-SA unless otherwise noted.