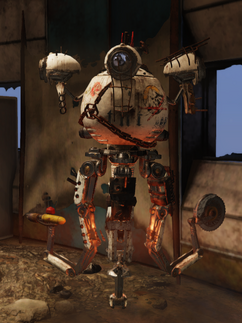 Rose is the de facto leader of what remains of the raiders in Appalachia in 2102. When raiders returned to the area in 2103, Rose was still intact.

Initially thought by the Vault 76 overseer to be a human that had sheltered themselves away at the apex of the Top of the World ski resort and thus survived the ravages of the Scorched Plague, the resident that eventually makes their way to the observation deck finds that Rose is not what the overseer had in mind.

Rose is a heavily modified Miss Nanny and self-proclaimed leader of the Appalachian raider gangs. Her behavior and voice are based on that of long-deceased raider Rosalynn Jeffries, the mistress of former Cutthroats leader, David Thorpe. Her exterior has shown many signs of customization, such as a scrap metal 'mohawk', wrapped chains, and various 'tattoos' painted on her chassis. She offers the player character tips of dubious usefulness, canned recruitment drives, and stories that give greater insight into the worldview of the raiders that once terrorized Appalachia.

Rose broadcasts her personal radio channel from the Top of the World. The range of the channel is expanded once the player character completes Signal Strength.

She sends the Vault 76 resident on various tasks both for practical purposes, as well as her own cruel amusement. This includes giving the player character a test to become a raider, as well as assisting them with finding a special raider stash.

Rose appears in Fallout 76 and its add-on Wastelanders.

Retrieved from "https://fallout.fandom.com/wiki/Rose_(Fallout_76)?oldid=3186701"
Community content is available under CC-BY-SA unless otherwise noted.