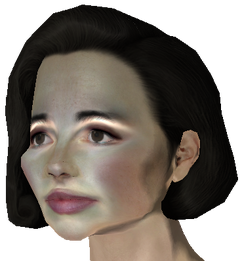 Rose was a prostitute that worked for Joseph B. Steyn in Nipton.

Rose was one of the prostitutes that brought in revenue for Nipton from NCR troopers and travelers. She was killed in the "lottery" (along with many others) the Legion set up when they raided the town.

Rose is mentioned only in Fallout: New Vegas.

Although not included in the final version, at one point Rose was to appear in Fallout: New Vegas, probably as a corpse based on the GECK ID "NiptonDeadRoseCF".

Retrieved from "https://fallout.fandom.com/wiki/Rose_(Fallout:_New_Vegas)?oldid=3005925"
Community content is available under CC-BY-SA unless otherwise noted.