Harland's up to no good
Interrogation: Doe, Jane

Poodleskirt
“Hmmm... nah. David's gonna come for me, and when he gets here, he's gonna be mad. He'll kill every last one of you if he has to, so here's how it's gonna be.”— Rosalynn threatening Melody Larkin, Interrogation: Doe, Jane

With her lover David Thorpe, Rosalynn would visit the Top of the World ski resort before the Great War. David was cheating on his wife Rita with Rosalynn and had been for some time. The ski resort was one of their getaways. After the resort trip, David was going to divorce his wife and marry Rosalynn, but those plans were changed by the Great War.[2] Trapped at the Top of the World, with no help in the foreseeable future from the government or anyone else, Rosalynn and David (along with all the others vacationing at the resort) decided they had little choice but to become raiders, taking everything they needed to survive.

The Cutthroats were the raider gang that emerged from the Top of the World. Along with the Cutthroats, many other gangs would go on to terrorize Appalachia, but the Cutthroats were the most powerful and feared of all of them. A perpetual thorn in the side of the Responders and Charleston Emergency Government, David Thorpe would become its leader and Rosalynn Jeffries his second in command. To celebrate David's leadership, Rosalynn made a trophy for him with a skull and "World's Best Boss" on it. Rosalynn relished her new role in life as a raider, taking full advantage of to fully indulge in her chem addiction. She would lead many raiding parties over the first couple of years after the Great War, but her final raid would be on Christmas Eve.

On December 24, 2082, Rosalynn would lead a large raiding party into Charleston during Christmas, hoping to bring something nice back as a present for David.[3] This raid would be repelled, but not without eight Responders losing their lives and twenty-four more receiving injuries in the process. Rosalynn would be the only raider taken alive, and her party would lose seven before the rest fled. During her interrogation by Melody Larkin, the Responders told Rosalynn that they were going to use her false death as a way to anger David Thorpe and get him off the Top of the World, thereby cutting off the head of the Cutthroats, once and for all.[4] In her jail cell, Rosalynn wrote a note to David, expressing her love for him and apologizing for getting caught.

While the false news of Rosalynn's death did enrage David, he wouldn't fall into their hands quite so easily. Instead of coming down from the Top of the World, David blew up the Summersville Dam with a mini nuke he stole from the Brotherhood of Steel. This would later be known as "the Christmas Flood," that would wipe most of Charleston off of the map. Rosalynn would perish in this flood too, accidentally killed by her own lover.[1][5]

Her body still lies in the jail cells of the Charleston Capitol Building. At some point before 2082, Rosalynn's behavior and voice were used in creating the personality of the Miss Nanny Rose, the current leader of the Cutthroats. David also created a shrine for Rosalynn in secrecy.

Rosalynn Jefferies appears only in Fallout 76. She was expanded upon in the Wastelanders update with the Strange Bedfellows quest and more dialogue from Rose in reference to her.

Mugshot of Rose in the Charleston Jail, sitting on the table beside a holotape 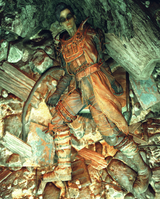