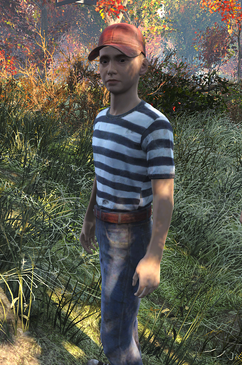 “Only Ms. Rosa's boy, running around in his Halloween costume, more than a week early. I swear, the nerve of that woman leaving her brat unsupervised.”— Codsworth mistaking the ghoulish appearance of Rosa's son for a costume.

Ms. Rosa's son is one of Nate and Nora's neighbors in Sanctuary Hills in 2077. By 2287, he has become a feral ghoul roaming the Commonwealth. He is encountered in a random encounter post-War, being one of a group of hostile ghouls.

Before the War, Ms. Rosa's son was presumably one of the neighbors of the Sole Survivor who was restoring an old Corvega with his mother. When the bombs fell, they didn't make it to safety. He can be found 210 years later roaming the Commonwealth and Boston with Rosa and a few other pre-War citizens turned feral.

After the nukes fell, Codsworth tells the protagonist that he had seen "Ms. Rosa's boy running around in his Halloween costume," implying that Codsworth had seen him as a ghoul and mistaken his ghastly appearance as simply a costume.

Retrieved from "https://fallout.fandom.com/wiki/Rosa%27s_son?oldid=3177246"
Community content is available under CC-BY-SA unless otherwise noted.