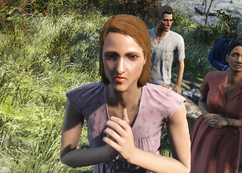 Ms. Rosa was originally a pre-War resident of Sanctuary Hills in 2077. Eventually, she became a feral ghoul as seen in 2287 in a random encounter, being one of a group of hostile ghouls.

Before the war, Ms. Rosa was presumably one of the neighbors of the Sole Survivor who didn't make it to safety. She can be found 210 years later roaming the Commonwealth and Boston, with her son and a few other unlucky pre-War citizens turned into ghouls.

In a terminal entry she is mentioned as a customer of a chems dealer who lived in Sanctuary Hills at one point, buying Buffout from them. She was also a widow and was restoring an old Corvega with her son.

Ms. Rosa appears only in Fallout 4.

Former neigbors in random encounter
Add an image to this gallery

Retrieved from "https://fallout.fandom.com/wiki/Rosa?oldid=3177245"
Community content is available under CC-BY-SA unless otherwise noted.