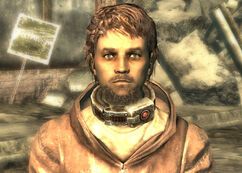 "The Box" in Paradise Falls
Megaton (if saved)

“What? Are you kidding me? This is another one of Forty's tricks isn't it. Well I'm not falling for it.”

Rory Maclaren is a slave being held in Paradise Falls in the year 2277.

Rory was born in 2247. One of the many slaves held at Paradise Falls, 30-year-old Rory remains here until someone wishes to purchase him. Unlike some of his fellow slaves, Rory is obsessed with escaping and spends every waking minute pondering ways of tunneling, creeping, or bludgeoning his way out of Paradise Falls. He is not about to be pushed around and has assaulted his captors several times. He's been placed permanently in "the Box," where unruly slaves await their fate.[1]

Rescue from Paradise: As a condition of leaving Paradise Falls, Penny will ask the Lone Wanderer to escort Rory to the entrance.

Once freed, he will travel to Moriarty's Saloon. Provided he survives, he will stand in the room to the right where Mr. Burke is found. When attempting dialogue, he will only say "Hey. Talk fast, they hate it when I talk to customers."

Rory Maclaren appears only in Fallout 3.

His line "Can't nobody eat fifty eggs," is a reference to the film Cool Hand Luke.