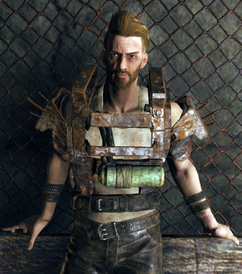 Hunter for Hire
The Elusive Crane

Roper is the leader of the Free Radicals in Appalachia in 2103.

Prior to the Great War, Roper was the head guard at the Western Maryland Correctional Facility. He reformed its surviving prisoners into the Free Radicals[1] and led them into Appalachia following rumors of untold riches. They managed to clear WV Lumber Co. of the super mutants that previously inhabited it and claimed it as their own, while extorting nearby settlements into giving them food in exchange for protection.[2]

Roper's search for the treasure of Appalachia put him on the trail of a treasure hunter named Crane who claimed to have discovered a vault full of unknown wealth. His investigation led to the Wayward,[3] and one of his subordinates, Batter, was sent there in search of Crane.

Roper appears only in Fallout 76, introduced in the Wastelanders update.

Retrieved from "https://fallout.fandom.com/wiki/Roper?oldid=3449704"
Community content is available under CC-BY-SA unless otherwise noted.