Roosevelt Academy with WKML Broadcast Station in the background. 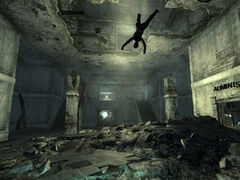 Academy entrance, with wastelander falling to his demise.

It consists of three main buildings: Roosevelt Academy, Roosevelt Library, and Roosevelt Arts and Athletics Hall. Before the Great War, this served as the primary private school for the D.C. area. After the bombs fell and the dust settled, the super mutants created as a result of the Forced Evolutionary Virus experiment in Vault 87 came and set up shop in the ruined buildings and surrounding areas.

Maintenance Tunnels and Evacuation connects the three buildings via a subterranean route. The tunnels are patrolled by centaurs and super mutants. The super mutants have two captives tied up behind locked doors. There are several gas leaks throughout the complex of tunnels as well, so pay attention to where and when you are shooting. The tunnel's Library entrance is hidden underneath a trapdoor which is activated by an electrical switch on the wall.

Higher level player characters with Broken Steel can find super mutant overlords throughout the site. This area contains one of the game's highest concentration of super mutants.

As you enter the Maintenance and Evacuation Tunnel from the Roosevelt Academy, you may notice a random explosion go off near a group of radioactive barrels. This is caused by a grenade bouquet that is set off by a bunch of objects set on the floor that twitch and knock a precariously placed radioactive barrel into the bouquet. You can dodge this by not bumping anything until you disarm the bouquet. [verified]

Miniature city building in the Art & Athletics Hall
Add an image to this gallery
Retrieved from "https://fallout.fandom.com/wiki/Roosevelt_Academy?oldid=2183121"
Community content is available under CC-BY-SA unless otherwise noted.