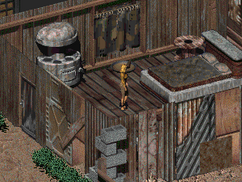 “Gypsies, huh? Well if you're some sort of witch, maybe we should just burn you, then. Get out.”— Chosen One

Rooney is an elderly woman living in Redding in 2241.

A very thin elderly woman with warts and a very furry upper lip[1], widow Rooney ekes out an existence by herding a small brahmin livestock. However, with the droughts affecting her cattle, she has been unable to cover the $20 monthly rent for the shack she lives in and sooner or later will end up evicted.

As an interesting fact, she is descendant from Gypsies.[2]

If Rooney is evicted out into the cold, she casts a curse (while making a hand motion) which does nothing to the stats. However, only 1000 XP is granted instead of 1500 (if she is helped with her rent) and -25 Karma.

Rooney appears only in Fallout 2.

Retrieved from "https://fallout.fandom.com/wiki/Rooney?oldid=3073245"
Community content is available under CC-BY-SA unless otherwise noted.