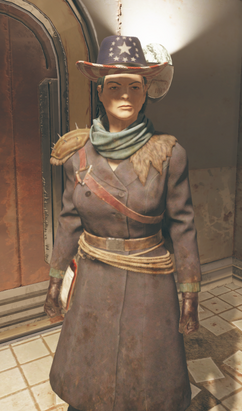 Ronny is a raider in Appalachia in 2103.

Ronny is the niece of Edwin, the leader of a gang of raiders. With Edwin being sick, Ronny has taken over effective leadership of the gang. During Thicker Than Water she helps Beckett and the vault dwellers gain access to the Watoga Underground to finally kill the leader of the Blood Eagles, the Claw. In the aftermath, Edwin peacefully retires, and Ronny officially declares herself leader of the gang.

Thicker Than Water: Ronny meets Beckett and the Vault 76 residents at the entrance to the Watoga Underground, explains the situation, and hands over the key to the Underground.

Ronny appears only in Fallout 76, introduced in the Wastelanders update.

Retrieved from "https://fallout.fandom.com/wiki/Ronny_(Wastelanders)?oldid=3468316"
Community content is available under CC-BY-SA unless otherwise noted.