Helps Allies
“I'm Ronnie Shaw. Commonwealth Minutemen. At least I was. Back before Joe Becker got himself killed and the idiots took over.”

Ronnie Shaw is a veteran officer of the Minutemen living in the Commonwealth in 2287. She contacts the Sole Survivor at the Castle via Radio Freedom or in person after the mission Taking Independence.

One of the few remaining veterans of the Minutemen, Ronnie Shaw has been around since long before Preston Garvey, Colonel Ezra Hollis or even General Becker. Around the time she joined the faction, General McGann was the leader of the Minutemen. When General Joe Becker was killed in 2282 and internal strife began, she gave up being a Minuteman for a time, but will join up again if the Sole Survivor retakes the Castle. It is also shown that she heard about Quincy and Colonel Hollis, and Preston Garvey, but despite this, she did not answer the call for reinforcements put out by Hollis.

She explains to the Sole Survivor that, despite Preston's hasty decision to promote them to general, her respect must be earned and is not going to come just because of a title, as she has seen many Minutemen leaders come and go already.

Ronnie Shaw opening the door to the Castle's armory 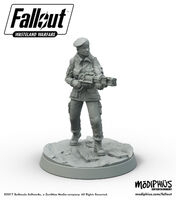 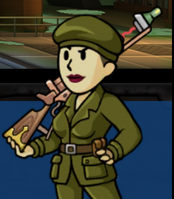