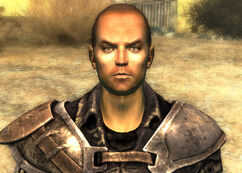 “How do I put it? I'd love to do the horizontal bop with her... you know, plow her bean field. Come on, kid.”— Ronald Laren

Ronald Laren is one of Girdershade's two inhabitants in 2277.

Ronald Laren was born in 2244. After his wife died, he wandered the wasteland until settling in Girdershade. Living in close proximity to Sierra Petrovita has made him feel even worse about being alone. His thoughts of loneliness are not as wholesome as most would think. Basically he misses the physical side of relationships. Feeling these urges, he's made several advances upon Sierra, who is completely oblivious to his motivations, because she is absorbed in her pursuit of Nuka-Cola. Ronald mistakes Sierra's rejection as being spurned, and this has angered him a great deal. Fortunately, he doesn't want to physically force himself on her but wishes to "get even" with her in other ways.[1]

According to Sierra, Ronald is a skilled fighter. She recalls one occasion where he killed two raiders at Girdershade and punched Lug-Nut in the face.

Ronald Laren will not spawn until one has started The Nuka-Cola Challenge.

Ronald Laren appears only in Fallout 3.

Retrieved from "https://fallout.fandom.com/wiki/Ronald_Laren?oldid=3336247"
Community content is available under CC-BY-SA unless otherwise noted.