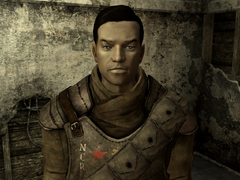 Curtis without his beret

“You're getting too close, Shamus!”— Captain Curtis (Wild Wasteland only)

Captain Ronald Curtis is an officer of the New California Republic Army, heading Bravo Company at Camp McCarran. The captain's real identity is that of a frumentarius (codename Picus) planted several years ago by Caesar's Legion to spy on and sabotage the NCR Army.

Officially an upstanding officer of the NCR Army, Ronald Curtis has enjoyed a meteoric rise through the ranks, reaching the rank of captain and position of Bravo Company commander in three and a half years (six months faster than usual). Of course, it was not by accident: Curtis is actually a frumentarius sent into the NCR by Caesar years before the Legion arrived on the banks of the Colorado River to challenge the Republic. Frumentarius Picus is one of the most prized operatives the Legion has at its disposal, a deep-cover agent whose false identity is years in the making, being sent west before the Legion had even reached the Colorado River. The former Bravo commander was snuffed out by Picus to place him in command of McCarran's Bravo company.[1] As commanding officer, Curtis became known as a hardliner. Missing roll call, for example, became desertion and reason for flogging troopers, regardless of the actual reason for the absence.[2]

While normally he would be commanding Bravo Company in the field, General Lee Oliver placed his company at Camp McCarran to shore up its defenses. While his men man the walls, Curtis helps Colonel James Hsu with logistics.[3] This is more than advantageous for Picus who uses his position to discretely provide information on NCR plans to Caesar's Legion, sabotage NCR assets and keep one step ahead of any efforts to apprehend him. Although he provides intel on patrols and other NCR plans back to the Legion each day,[4][5] his main goal has been to build up trust with Colonel Hsu to pull off a major sabotage plan without losing his cover.[6][7] Picus currently has Martina Groesbeck as an informant on the Strip, feeding him information on New Vegas, particularly the casinos; although she would never wittingly help slavers, Picus has concealed his true allegiance from her and is aided by her intelligence gathering.[8]

The Legion's Frumentarii have been planning this operation for years as a part of the greater Operation: Racket, first requiring Picus to infiltrate the NCR. The NCR bolsters its presence on the New Vegas Strip from Camp McCarran; using the connecting monorail lets them occupy two positions for the price of one. In his years at McCarran, Picus has learned all he can about this monorail and intends to sabotage it. However, Picus believes that Colonel James Hsu is beginning to suspect him; therefore, he is looking for the right scapegoat on which to pin the sabotage. He left some bomb-making supplies alongside a bomb, which are to be placed in Private Davey Crenshaw's personal footlocker to incriminate the practical joker. Although, for this plan to work, Private Crenshaw cannot be allowed to blab and deny his involvement, meaning he must be dead before the sabotage is reported to Colonel Hsu.[9][10] Picus currently is only steps away from pulling off his major plan, but bides his time for the right pieces to fall into place and to find the extra conspirator to ensure his alibi is established.

Silus, the captured Legion centurion, recognized Curtis upon being brought into McCarran, having seen him years earlier during the latter's frumentarii training. He did not know his alias, however.[11] Curtis is also well known to Vulpes Inculta, the frumentarii leader, for his resounding work at infiltrating the NCR and has been keeping close tabs on his progress.[12]

Retrieved from "https://fallout.fandom.com/wiki/Ronald_Curtis?oldid=3493606"
Community content is available under CC-BY-SA unless otherwise noted.