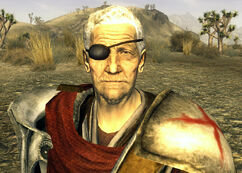 Ron the Narrator is a character placeholder used to narrate sections of the game in Fallout: New Vegas.

Ron the Narrator cannot be seen in the game itself, but exists in the game files. If Testacles the Debug Centurion is spawned and the endgame slideshow is viewed using his dialogue options, Ron can be seen behind the curtain where the slideshow is being played. Attempting to talk to him will make the camera zoom in and then immediately back out, after which the slideshow will advance to the next slide.

GECK render
Add an image to this gallery
Retrieved from "https://fallout.fandom.com/wiki/Ron_the_Narrator?oldid=3190191"
Community content is available under CC-BY-SA unless otherwise noted.