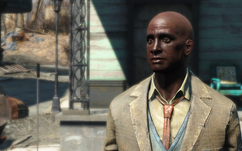 Ron Staples is a character living in the Commonwealth in 2287.

Ron Staples is a traveling bartender that can be found in a random encounter. If the one settlement, or network of settlements linked by supply lines, has a population of over twenty, he can be recruited and function as a legendary trader.

Ron Staples appears only in Fallout 4.

Retrieved from "https://fallout.fandom.com/wiki/Ron_Staples?oldid=2620077"
Community content is available under CC-BY-SA unless otherwise noted.