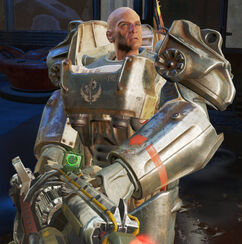 The rogue knight is a legendary opponent in Nuka-World in 2287.

The rogue knight, real name unknown, was a member of the East Coast Brotherhood of Steel before going rogue. They have managed to reach Nuka-World and get through the deadly gauntlet set up by the raiders.

The rogue knight appears only in the Fallout 4 add-on Nuka-World.

During the quest Amoral Combat, the rogue knight may not attack the Sole Survivor until they are attacked.[verified]

Retrieved from "https://fallout.fandom.com/wiki/Rogue_knight?oldid=3326638"
Community content is available under CC-BY-SA unless otherwise noted.
... more about "Rogue knight"
RDF feed
Has platform
Playstation 4 +  and Xbox One +