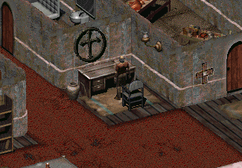 “I'm Roger Westin and you can't come barging in here. What do you want?”

Councilman Roger Westin[2] is one of the most powerful and important politicians of the New California Republic in 2241.

A man used to getting what he wants,[2] Roger Westin is one of the wealthiest citizens of the NCR, a budding brahmin baron with his own, sizable ranch within the capital's city limits. Though he cares about the people working for him and has a charitable soul, he is not too modest and likes to display his wealth, as the silver rings with inlaid turquoises and the silver belt buckle indicate.[2]

He is also a very successful politician, representing rancher interests in the Republic Council. This puts him at odds with certain aspects of President Tandi's foreign policy, more specifically, the rapprochement with New Reno's Bishop family. He and the ranchers blame Reno gangsters for rustling their brahmin drives and undermining their profits, a crime that cannot go unpunished in their eyes. As such, Westin would like to see the alliance broken.

Westin can be found on his ranch in NCR. To get past the guard and forcefield a reference will be needed: speak with the Sheriff of NCR and ask for some "honest work." Once on the ranch, a quest to help Westin stop raids on his brahmin can be accepted.

There is an additional code that makes him susceptible to a single super stimpak.

Roger Westin appears only in Fallout 2.

Retrieved from "https://fallout.fandom.com/wiki/Roger_Westin?oldid=3445344"
Community content is available under CC-BY-SA unless otherwise noted.