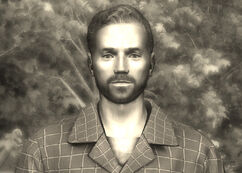 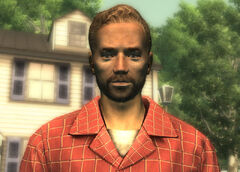 “Now see here. That's not anything for you to be asking about. Our marriage is our business, and it's private. Why can't people just understand that, and just leave us alone?”

Roger Rockwell is one of the inhabitants of Vault 112 and part of the Tranquility Lane virtual reality simulation, still alive in 2277.

Janet has been acting a little less than chipper lately, starting arguments and flying off the handle at the slightest sign of stress. Roger puts this down to "women's troubles," and thinks she should talk it over with one of her neighbors, like that nice Martha Simpson.[1]

Like the other inhabitants of Vault 112, Rockwell is trapped in the Tranquility Lane simulation and subject to Stanislaus Braun's whims.

Roger Rockwell appears only in Fallout 3.

The name "Rockwell" may be a reference to the American artist "Norman Rockwell" who is known for his illustrations of Americana on the covers of Life magazine in the '40s through the '60s. Many consider his works to be referential of a simpler time, similar to the atmosphere of Tranquility Lane.

Retrieved from "https://fallout.fandom.com/wiki/Roger_Rockwell?oldid=3186189"
Community content is available under CC-BY-SA unless otherwise noted.