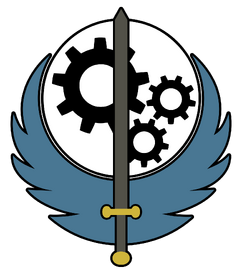 High Elder[2] Roger Maxson (service number 072389) was a captain in the United States Army and the founder of the Brotherhood of Steel, serving as its first high elder after the Great War.[3]

In 2076, the NBC division of West Tek achieved breakthrough results in the Pan-Immunity Virion Project. The United States Defense Department, in fear of international espionage, moved a military team under the command of Colonel Robert Spindel and Captain Roger Maxson onto the site to secure and oversee the project, now dubbed the FEV (Forced Evolutionary Virus) project.[4] On January 7, 2077, all FEV research was moved to the newly constructed Mariposa Military Base to commence testing of the virus on human subjects.[5][6] The security team was transferred to the newly constructed base as well, to provide protection for the research going on within the facility. They were not informed of the nature of the research.[3]

The secrecy backfired shortly before October 10, 2077, when soldiers stationed at the base discovered the human testing that was going on at the base, made worse by the fact that the scientists were using military prisoners as test subjects. Colonel Spindel suffered a nervous breakdown, locking himself in his office, leaving Captain Maxson to handle the deteriorating situation at the base. The soldiers were screaming for blood and became increasingly aggressive. When two days later, on October 12, the captain stopped a soldier from murdering a scientist, he ordered the scientists to be interrogated.[3]

The first scientist to be interrogated by Captain Maxson was Robert Anderson, the chief of the research team at Mariposa. Anderson explained that the testing at the facility was sanctioned and, in fact, ordered by the government, as he outlined the experiments to the captain. When Maxson refused to believe him, the scientist lost his nerve and started screaming how he was just following orders and that he was also a military man. In response, Captain Maxson murdered him.[3]

This established Maxson as the leader of the rebellion. His position was further reinforced on October 15, when Colonel Spindel committed suicide as his men broke into his office. Subsequent scientist interrogations invariably ended in executions. By October 18, the scientists on the project were all dead, murdered by Captain Maxson. Erin Shellman held out the longest, almost convincing the captain that the experiments were really ordered by the government.[3] On October 20, 2077, Captain Maxson declared his unit in full secession from the United States, attempting to force the government to respond to the situation at Mariposa. No response came, but news of the mutiny spread through the wider United States Army.[7] A day later, he ordered the families of soldiers under his command to take shelter within the facility.[3]

The Great War struck on October 23, 2077. As Maxson was halfway through prying details from Leon Von Felden at West Tek, he was cut off by the nuclear detonation at the West Tek research facility. Spared the nuclear devastation, Mariposa protected the inhabitants from nuclear fallout and the wild FEV flooding the wasteland. Fearing that China would soon make up for the oversight, on October 24, Maxson ordered his soldiers and their families to prepare to vacate the base the next day.[8]

On October 25, Sgt. Platner volunteered to take atmospheric readings outside the base. Reporting no significant amounts of radiation in the atmosphere, final preparations for the Exodus (an event later referred to by that single word) were undertaken. On October 26, Maxson ordered the remains of the scientists to be buried in the wastes outside the base. A day later, on October 27, former U.S. servicemen and their families left the base under the leadership of Captain Roger Maxson, heading for the Lost Hills government bunker in the south.[3]

In November, a few weeks later, the refugees arrived at the bunker. The people suffered casualties along the way, as while the soldiers enjoyed the protection afforded by their T-51b power armor, their families did not. Marauders that attacked the caravan on its route quickly learned to target the unprotected civilians. Although for every lost civilian two raiders fell, many lives were lost, including Roger Maxson's wife.[Non-game 1][9] Several soldiers broke off during the Exodus as well, under Sergeant Dennis Allen.[10] He demanded the leadership to allow him and his group to explore the ruins of the West Tek Research Facility for advanced technologies left behind. Ignoring warnings from Captain Maxson, Allen's faction separated from the main caravan and ventured southeast to the Glow, taking their power armor with them. They were never heard from again.[11]

The remaining Exodus survivors claimed the bunker as their own. The soldiers established it as a headquarters for their organization while the refugees expanded and adapted it to fit their own needs, transforming the bunker into a bastion of technology in a world that had lost centuries of technological development overnight.[12] Shortly afterward, Maxson and his men used a communications satellite to contact other Army units across the country. One such unit, based in Appalachia, was led by Elizabeth Taggerdy, an old acquaintance of Maxson's.

Sometime later, in a proclamation to his men, Maxson declared that the United States had failed to protect its citizens and serve their needs during the years leading up to the War, and stated that they must form a new order to preserve civilization: a "Brotherhood of Steel."

The beliefs of the Brotherhood were shaped by the experiences of Captain Maxson. At first, the Brotherhood focused on aiding survivors to the best of its ability, acting as an armed fighting force, rather than a military order it would become. The change came with the realization that the collective knowledge of humanity was in danger of being lost for generations to come. To keep the secrets of the past alive, Maxson decided to dedicate the Brotherhood to the preservation of technology and human knowledge, collecting it so that the Brotherhood might become the catalyst for humanity's rebirth. As the guardians of civilization, the Brotherhood would focus on the big picture, with direct aid considered a secondary concern.[13] While scribes were originally considered second-rate members, merely tools to protect knights and maintain the Brotherhood's bases, this change in priorities placed them on equal footing with soldiers of the Brotherhood, tasked with preserving and developing technologies recovered from the field by the knights.[13]

Maxson's intention was to maintain the Brotherhood as an organization that worked closely with people outside of its ranks, as protectors of civilization rather than its gatekeepers. His idea of an open Brotherhood put him at odds with isolationist members of the Brotherhood, including his own son and Paladin Taggerdy. Although nobody confronted him openly on the issue, out of respect for his role as founder, Roger Maxson was in the minority.[14]

Maxson remained in frequent contact with the Appalachian chapter, often broadcasting speeches about specific elements of his philosophy in creating the Brotherhood. Maxson was deeply troubled by the sudden appearance of the Scorched Plague and accompanying Scorched and Scorchbeasts, advising Taggerdy on setting up kill zones to lure the Scorched into. He maintained communications until the satellite burned in the atmosphere, as no one was left to correct its orbit. In his last transmission, he assured Taggerdy of his complete trust in her leadership and promised to send help as soon as he could.

Sometime before 2103, High Elder Maxson and his Council of Elders approved Paladin Rahmani's request to form an expedition to journey to Appalachia, and discover the fate of the MIA, presumed KIA, chapter.[15][16] Although the trip took many months, with the Council of Elders having doubts about Rahmani's faith in the Brotherhood, Maxson remained adamant in his belief of her, but also urged her to reestablish communications with the Lost Hills chapter as soon as possible.[17][18] However, Rahmani has effectively delayed going through with this order, as she is more focused on establishing a positive presence in Appalachia, further deepening the rift between her and Knight Daniel Shin.[19]

of cancer in 2135. Already a legendary figure to the Brotherhood, he was deified as the Founder and Deliverer. His son, Maxson II, replaced him as the high elder, while his grandson, John Maxson, joined the paladin caste, showing great promise.[1][Non-game 2] Although the new leadership paid lip service to his ideals, they moved to isolate the Brotherhood from the outside. The most noticeable effect of the change in leadership was the cessation of outside recruitment by 2141, relying solely on natural growth.[20] Two places are known to be named after either him or his descendants. One of which is Maxson, one of the states of the New California Republic.

The other, the Maxson bunker, is a Brotherhood of Steel outpost somewhere to the east of California.[Non-game 3]

The last living descendant of Roger Maxson is Arthur Maxson, who spent his childhood inside the Citadel in the Capital Wasteland, under the care of Owyn Lyons and the East Coast chapter of the Brotherhood of Steel.[21] In the year 2287, he is the elder of that chapter, aboard the Prydwen in the Commonwealth.

Roger Maxson is mentioned in Fallout, Fallout 3 and Fallout: New Vegas. He is also mentioned by way of recorded voice in Fallout 76 and its Steel Dawn update.

Fallout 76 may have given Maxson an even more prominent appearance, though this idea appears to have been scrapped early in development. There are several voice lines for Maxson that are not used anywhere, and can only be found by searching through all audio files. Most cut dialogue files have internal "scenes" attached to them, though these lines do not. At one point, direct contact was intended to have been established between Maxson and the Vault Dwellers. He would have asked the player character to find the bodies of Squires Belmonte and Kerry, and to report their cause of death in the "Brotherhood Terminal."[22] Technical data in the quest Forbidden Knowledge would also likely have been sent directly to Maxson and the Lost Hills team via uplink.

Retrieved from "https://fallout.fandom.com/wiki/Roger_Maxson?oldid=3444850"
Community content is available under CC-BY-SA unless otherwise noted.