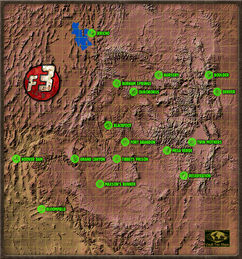 Fallout: New Vegas
Fallout 76
One Wasteland For All

The Rocky Mountains, or Rockies for short, are a mountain range in North America.

Before the war, Dutch Wharton, the senior vice president of Hornwright Industrial's corporate engagement department suggested to CEO Daniel Hornwright that they put the Motherlode project on hold in favor of a more lucrative endeavor that would result in the company becoming "the premier industrial company east of the Rockies."[1]

In 2103, Paladin Leila Rahmani led the First Expeditionary Force across the country, from Lost Hills to Appalachia, with goals of re-establishing contact with the lost chapter of the Brotherhood. A message records the loss of contact with the group after they crossed the mountain range.[2]

After traveling with the Chosen One, Marcus ventured into the Rockies in search of more first generation super mutants like him. He eventually returned with a small flock, founding a town on Black Mountain in the Mojave Wasteland.[3]

The Rocky Mountains are the second largest mountain chain in North America, stretching more than 2,000 miles from Canada to New Mexico.

The Rocky Mountain Arsenal was a planned location within Van Buren.

Retrieved from "https://fallout.fandom.com/wiki/Rocky_Mountains?oldid=3454633"
Community content is available under CC-BY-SA unless otherwise noted.